Can the edit approval rules be improved?

When a post has a suggested edit, it takes several votes to approve the edit, even by people who could themselves edit posts without review. While the edit is pending, I can't directly edit the post either. This is counter-intuitive and drives me a little nuts, because I want to see the post edited and improved.

I propose to change the edit rules that an already approved editor can, with a single vote, approve or disapprove pending edits, so that the post is again open for further edits.

I very much don't like the idea of requiring fewer reviewers in general, for much the same reasons as Joe W mentioned. When people actually edit a post, they tend to put in some effort - they're doing a complex task (editing the text of the post), their name's going on it. But when going through the review queue, and only making a simple yes/no decision, it's very very easy to skim quickly and miss things.

If suggested edits aren't getting reviewed quickly enough, it's because people are not often enough going into the suggested edit queue and doing the reviews. 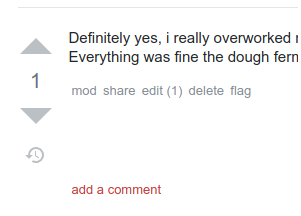 (Screenshots are from another site, since there's nothing in the queue here right now.)

At this point you can cast your one approve/reject vote and see if it's enough to finish the review. You can also "improve edit" or "reject and edit", if you have edits you want to make, and you're willing to make sure the entire post is in a good state after your edit (i.e. that you haven't introduced issues by accepting the suggestions, or that you haven't left issues unaddressed by rejecting the suggestions).

This is something that is unlikely to happen as it has been shown on other sites that people who have the edit privilege are not always properly reviewing suggested edits. Because of this the rule is in place that either multiple people need to review it or the poster can approve it themselves.

I know this is frustrating but I do agree that we don't want someone just robo reviewing the suggested edits and having a lot of bad edits go through.

Not the answer you're looking for? Browse other questions tagged discussion .

1
Enough with the MtG Comp Rules
23
What can you do for B&CG? Winners Announced!
10
Copied tag wikis
7
Single tag wiki - Multiple games
7
Can I make a substantial content edit to an answer in these circumstances?
0
New Tag Wiki - approval critera
11
2018: a year in moderation