Why was my answer deleted?

I posted this answer (2K only) yesterday, along with this answer. It's not a great answer; the community does not even seem to think it's a very good answer, but it is a valid answer to the question.

The moderator who deleted the question said

When I commented with that information, the moderator seemed to delete the answer out of exasperation, saying

After several requests, you keep questioning my moderation here instead of Board & Card Games Meta, so I'm just moving on. Peace.

I believe that this was an incorrect deletion and an improper use of moderator powers.

For reference, here is a screenshot of the current state of the answer and comments: 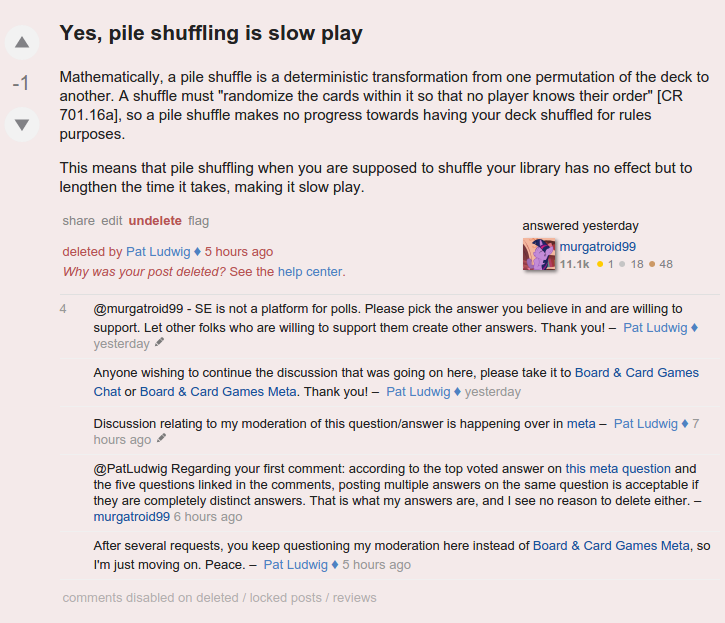 Update: My other answer on that question was just deleted. This is ridiculous.

I think there are a few separate issues here.

Meta discussion should be on meta.

I pretty much agree with Pat here. I wish things hadn't escalated quite as much, though.

In any case, as the disagreement in the comments showed, we have something to discuss, and I can understand a moderator being exasperated when we refuse to use the tools given us for having that discussion. So unfortunately, I think we pretty much backed Pat into a corner. By discussing only in comments, we were basically declining to have a real discussion, at which point I think he was within his rights to act based on his own views.

In any case, I do think this would've all been simpler if we'd come to meta sooner like Pat asked.

Should you have had two separate answers to this question?

tl;dr: meh, I don't really think so, but if you want to, it's acceptable, no rule against it.

A sentiment I've seen a few times: if the question needs multiple answers, it might not be a good question. There's certainly some truth to that here: the question aimed for a yes or no answer, but it's not really a yes or no question. Slow play is always going to have gray areas.

In that spirit, I think it would've been possible to avoid the whole issue by writing an "it depends, sometimes yes sometimes no" answer. You'd still be able to make the same points, and I think it would be a better, more complete answer than either one of them on its own. You'd convey something more fully thought out, rather than the split answers which have trouble coming to any real conclusion. You'd avoid people rebutting one answer with things you said in the other. Bottom line, you could make your point about the question not having a single clear answer directly! Seems win-win to me.

On the other hand, that's all stuff about how I think you could best write your answer, and that's not really up to me. There's a way in which you can write answers to the question such that they become mutually exclusive and thus should be separate answers. If you want to present it that way, I suppose it's okay.

Is it worth moderator enforcement (answer deletion)?

I do think it would have been better to write just a single answer. But is it a big enough deal for a moderator to step in? I waffled a lot about this. My first preference would of course be to come to consensus and avoid the whole issue (via a meta discussion on meta).

Failing that, I think I lean toward no. If you want to provide two answers even though it might be less helpful, that's your choice, and I can always downvote if I think they're unhelpful. As mentioned above, there's no actual rule against it.

That said, if this kind of thing became a pattern, I would lean more toward enforcement; if we have people systematically presenting their answers in less helpful ways, trying to artificially chop them up into distinct pieces, that's probably not great for the site.

If the answer is spam, offensive, or not an answer, delete it.

Otherwise, if the answer is not causing problems, then there is no need for heavy handed moderation. The community should be allowed to vote on it. The bad ones get downvoted, and the good ones get upvoted. That's how Stack Exchange works.

Thanks for posting on meta. It is the proper forum for questioning moderation.

Oddly, the question you chose to post contains a quick answer within the text of your question. I'll give the better answer below.

@murgatroid99 - SE is not a platform for polls.

You admitted you set up a poll in a comment. You also stated that you probably covered all possible answers.

The question reads as subjective to me. I thought it had the potential to be good subjective, which is why I did not downvote it or vote to close. Instead, I presented the two answers that I expect this question to get (approximately), with the expectation that votes would indicate consensus about which answer is correct.

Posting multiple answers can be valid, but should be rare. Attempting to cover the whole answer space by posting diametrically opposed answers does not help. You cannot believe that both answers are true. I didn't read everything in all threads you linked to but I didn't see any indication of support for answers that the poster does not believe in.

The difference between multiple answers and "a poll" is where we might differ. To me, someone posting different answers is proposing two different answers to a problem. They believe in each one, but do not know which is best so they offer both to the community.

I would like to see the answerer willing to own both answers, curating them as new information flows in.

I don't have an answer to that. I was trying to present the argument as I understood it. I don't know enough to improve this answer.

Intent is everything. I believe your intent was to set up a poll and not provide different yet simultaneously correct answers.

I think your actual thoughts on the question were contained with a comment on the main question. (Don't put your answers in comments!)

Since it's not explicitly mentioned in the tournament rules, it most likely varies from one judge to another. The situations you mention support that hypothesis: some judges say that the would rule it as slow play, while others clearly don't. I'm not really sure what you're expecting here besides one answer with "yes, it is slow play" and explanation, and another with "no, it is not slow play" and explanation. And you already seem to have provided both of those explanations.

Now that I've received a chance to put my thoughts down on this it seems that I did make a mistake. You haven't stated clearly what the answer you most believe in is. You've given three answers (including the comment). I only deleted two and could lead to confusion or possibly signal which answer I prefer. I've rectified that. I encourage you to re-answer that question if you are able to clarify your own thoughts about what the correct answer should be.

Why are polls bad?

I'm sure most are aware of this, but for completeness I wanted to answer this briefly.

SE works because it connects people with questions to people with answers. People are incented to answer in part because of reputation. At the time I deleted the second answer there were a total of 5 upvotes and 6 downvotes to the two questions. Prior to the deletion that resulted in +38 reputation. This leads to a higher rep and the user being slightly more trusted.

Repeat this a few dozen times and you begin to see the issue. How many questions do we get that can be boiled down to "Yes" or "No" ? How much reputation could be gained just by answering quickly and first regardless of the correctness of the answer?

The race to be first is already strong enough. The rewards are evident. But lets encourage each person to lead with their best answer and be rewarded thusly. Attempting to monopolize the whole answer space should not be rewarded.

I believed what I did was in the best interests of the site and/or community.

Not the answer you're looking for? Browse other questions tagged support .

3
When is it appropriate to submit multiple answers to the same question?

0
Unmerge these two questions or fix the question
1
When should I accept an answer?
3
Why can I edit on main but not on meta?
4
When should the 'not an answer' flag be used?
20
Why are we still in Beta?
3
Can we do something about getting a simple on-death-trigger canon question?
4
Why aren't answers-in-comments I'm flagging being deleted?
0
Why is my edited answer greyed out?
3
Why did this question get three review comments?