Alternate name: a userscript for makin' the fancy pictures happen

I've created a userscript that auto-converts MTG's mana and tap symbols to image form. A lot of us have wanted this for a while so I went ahead and made it exist. You can get it here on Greasyfork:

What's this script do?

This script will convert the following to fancy image icons:

This script kicks in on any question page for this site (main or meta) when that question is tagged magic-the-gathering. It pays attention only to uppercase mana symbols in plain text. That means it ignores “{w/u}”, and it ignores code blocks and image alt text.

This script uses one sprite sheet so you're only loading one image.

With the script, the above section looks like this: 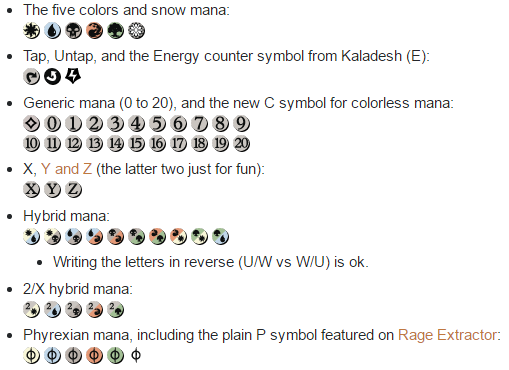 Welcome!
This site is for discussion about Board & Card Games Stack Exchange. You must have an account there to participate.
Help

9
Can the Magic card auto link feature be improved?
29
Can we get auto conversion of mana and tap symbols?